A praise of fight and persistence –
CREMATORY’s “Rise And Fall” dives deep into the dark struggles of human fate
Watch The Video HERE |
About Crematory:
One of the pioneering acts of the potent European goth metal scene in the 1990s, CREMATORY began as a strict death metal unit in 1991 before adding goth and industrial elements into their arsenal. In their 28 year long career, the band around Markus Jüllich released 14 studio albums, three live albums, various compilations and splits and played hundreds of shows around the globe – and they are still hungry for more. 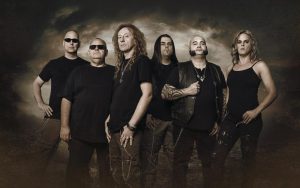 CREMATORY are:
Felix Stass – Lead Vocals
Markus Jüllich – Drums
Katrin Jüllich – Keyboards
Rolf Munkes – Lead Guitar
Connie Andreszka – Guitars, Vocals
Jason Matthias – Bass
The harsh wave of the electrifying synergy of industrial metal and gothic dimness hits stronger than ever before: German pioneers of European gothic metal, CREMATORY, release their third single, “Rise And Fall” off the upcoming album, Unbroken, to be released via Napalm Records on March 6, 2020.”Rise and Fall”, as well as the expressive music video, showcases both melodic and mercilessly heavy side of CREMATORY’s musical identity. They are spinning a web between their boundary-breaking origins and the newer, matured and more experienced approach the band developed while reflecting on own presence in the scene for the last 29 years. The single was created with OneSaidZero (Co-Production), who was also responsible for the remix of „Unbroken“.

While profiting from the signature sound trademarks – such as Felix Stass’ raspy vocals or the guitar-based brutality harmonized with melodic keyboard-samples – “Rise and Fall” strikes with its undeniable power and musical strength, like a phoenix of fire and ashes, uniting the industrial and gothic influences of this German sextet.

In this way, this melodic, heavy and empowering anthem of hope and rebirth connects all of the major goals CREMATORY set for their upcoming release: on the one hand underlining the significance of strength and determination, while, on the other, remaining faithful to the darker and existentially roots of the scene the band was born in in the 90s. Like the dichotomies between hope and despair, so does the vocal duet in “Rise and Fall” emotionally highlight the continuous, yet equally engaging battle of life forces, as well as the human struggle to find the way back into the light.

Accompanied by the equally impressive video, with “Rise and Fall”, CREMATORY pursue their conquest towards the dark Parnassus of gothic metal finesse, their spirit unbroken ready to face the challenges of life.

CREMATORY about “Rise And Fall”:
“Rise and Fall” symbolizes the “Tear of Time” of the new age! With this song, we have managed an absolute banger! I am sure that this track will be the new CREMATORY anthem!”