Boston, in essence, saved my life.

It is sad to me that Sib Hashian, formerly of Boston, passed away. Boston has been so important to me in my life, especially the first two albums that he played on. Boston, “Boston” was the first Rock/Metal album that I purchased with my own money. I had an old Montgomery Wards stereo system that was a hand-me-down from my parents. Prior to Boston, it only played Leif Garrett, Shawn Cassidy, and the score from Star Wars. I played Boston’s “Boston”  until it skipped…until the grooves were so deep that you could feel them with your fingers. As each new audio version came out, I repurchased each release on its new format.  It was through Boston that I found the love of my life…Music. 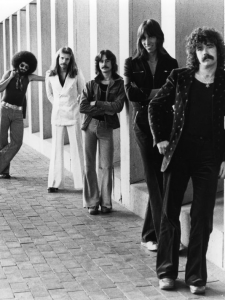 Here is where Boston, in essence, saved my life.

When I returned home from South Africa, I was having a bit of a difficult time.  My trip didn’t go as planned and I’ll just say it left me with a few scars.

Fast forward two weeks into returning to the United States.  It was the day before Boston played the Moda Center in Portland, Oregon. Jerimia and Susanna lovingly called me and asked me to attend the show with Jerimia and write a review for MIRP.

I was hesitant, but ultimately agreed; I almost cancelled.

I was afraid. I had just returned from living in one of the most dangerous countries in the world. A place where you needed to be afraid of everyone, because many hate you due to your color and country of origin. A place where you pad locked yourself in at night and there are bars on every door and window. A place where I was considered unintelligent, promiscuous for being friendly, and spoiled because I was an American woman. For those three years I wasn’t allowed to do anything by myself. I was accused daily of having very bad taste in music and being “inappropriate” because I had associated myself with the metal scene who is made up of mostly men. “Women shouldn’t love rock and roll,” I was told that often.

Jerimia met in town and we walked together to the venue. Not the main part, but the office where you get your media credentials. I was afraid, but tried not to show it. Soon, Jerimia and I were separated (he was escorted downstairs to take pictures, and I was to go into the Moda center by myself with everyone else who had a ticket and claim my seat).

And it was then it happened.

I remember the exact moment that I knew I was going to be OK; The exact moment I realized I wasn’t broken after all, I just had a little rip… a little ding in my armor. It was when I walked into the Moda center by myself and was swallowed up by the sea of people, people just like me who love music. Men and women. It was smelling the scent of rock fans when they gather. It was hearing their collective chatter. It was through the ceremony of having my physical ticket scanned, being searched, finding my assigned seat, and the anticipation of seeing Boston for the first time…all by myself; it was exhilarating and empowering.

Moments before Boston took the stage, a giant American flag waived on the enormous screen behind the stage.

I cried. I cried off and on through their entire set as I sang the words to every song of this important band.  A band that reminded me that I am fine.