I was the second person in line to see Anvil on this night.  I hadn’t seen them since the early 80s, and I was beyond excited.  You see, when I was a kid in the early 80s, my best friend and I would sneak into her older brother’s room to check out his music.  We weren’t allowed in there, but he wasn’t home often.  We went through Motorhead, Black Sabbath, UFO, Rush, and then we found it:  Anvil.

I was horrified when the first band Sunlord, took the stage, because there were so few people.  I thought:  Anvil, one of the bands that originally got me into heavy music…Anvil, the subject of the awesome documentary, “Anvil, the story of Anvil”… Anvil, the most animated, deserving, authentic band that hit bad breaks at every turn…how could the place not be packed?  Luckily, as each band made their way through their respective sets, the crowd filtered in in force.

Sunlord, from New York was first, and I was surprised that the local Madwagon wasn’t up first.  That’s usually the case isn’t it?  Well, usual was thrown out the window on this ni 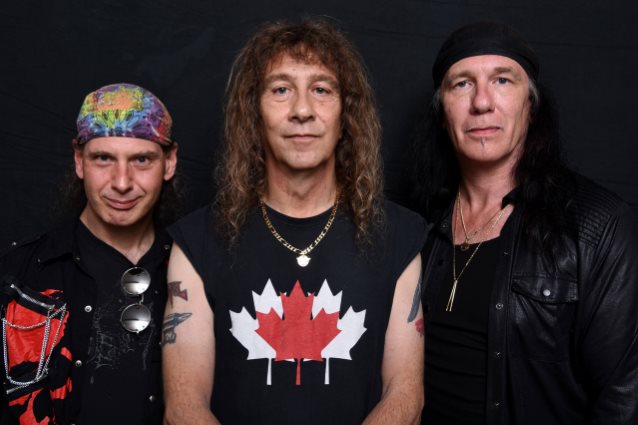 ght.  Sunlord came with an extreme amount of energy.  A little Prong mixed with a little Motorhead, their sound was loud, fun, and energetic.

The staff at Bossanova in Portland, Oregon, know how to switch sets fast, so quickly, Brazil’s Shadowside was up.  Had I not known, I’d have guessed this talented band was from Sweden.  The charismatic bassist, the virtuoso guitarist, the blonde drummer, and the beautiful singer blended together perfectly to ultimately put on a great set.  While the last half was significantly better than the first half, knowing they were so far from home somehow made it understandable.  They were gracious, heavy, and fun to watch. I continuously heard a buzz about the last two songs they played and agreed that had all of their songs had that pace and groove, they would be superstars of the most monumental proportions.

Now for the local band.  I’d seen the vocalist/bassist Angelo play many times in his previous band and caught him before the show to find out it was only their second time playing live.  He introduced me to his drummer around I told him of my love of broken sticks.  “Are you a stick breaker?” I asked.  “You should have been to the last practice!  I broke 7.”  Excellent, I thought.  Madwagon is a band that is timeless.  It could have been in active at any time between 1980 and 2018.  One of the many things I love about this new band is the fact that they are experienced, seasoned musicians, who put together a band that plays music they love.  Each of them talented in their own right, their collective style works magically.  Angelo Bria, the vocalist and bassist has to be the musician who has the most fun on stage ever, but while playing incredibly well, and singing each note perfectly.  Guitarist Rodney Hardison looks, moves, and plays like he just made a stop here in Portland, straight off the Sunset Strip circa 1985, and drummer Rich Morris looked as if he was one with his shiny kit.  With hand/stick acrobatics and not one beat missed, he smiled, and did something I’ve never seen before.  He walked to the outside of his kit and played it from a standing position for a moment; it was awesome.  And, prior to exiting the stage, he walked over to hand me his well beaten up stick, of which I was grateful.  There was a reason his band was in direct support, and soon others will be supporting them.

The venue was full now, and people began their invasion of personal space routine to get close to Lips!  While there are three in the band, Lips is the most recognizable, charismatic, and lovable.  Anvil is:  Lips – vocals/guitars, Robb Reiner – drums, Chris Robertson-bass.  Whether those in attendance were fans of Anvil or just curious from seeing the movie “Anvil: The Story of Anvil,” Portland ultimately came in full force.  Having been around since 1977, it’s a shame that their popularity hit with the same intensity as bands like Raven, Anthrax, Metallica, etc., in the beginning, but due to one crappy circumstance after another, their popularity didn’t rise again until 2010 when the documentary came out, and not only did it re-invigorate our love of Anvil, it won a ton of awards and made them relevant again.  Lips was on stage for a second, and then ventured into the crowd.  The crowd gathered around as he smiled and rocked out with each and everyone in the metal circle.  I turned about half way in to look at the stage, and the bassist was making faces and dancing about.  I’m sure it happens every night.  At 62, Lips still sings about sex and never growing up.  His cartoonish facial gestures make you fall in love with him, and your hope and dream for him is that he hits the big time, this time.

Since I was the second one in line, I had a pristine position slightly stage left.  As luck would have it, it was right in front of Lip’s mic.  He’s genially happy to be there, and to see you.  He makes you feel as if you are a personal guest of his.  While the youth of today likely don’t even know who Chuck Berry and Elvis are, he talked about how they made him love music, and even did an Elvis pelvis move to a crowd roaring with giggles.  I know I picked up my Anvil shirt the moment I walked into the venue.  My original is not wearable, and I was pleased that the logo remained the same.  A simple black shirt with the classic ANVIL in red printed across the breast.  The men in Anvil are personal, approachable, and glow with the aura of being musicians.  Had there been 2 people there instead of a full house, I feel like the show would have been the same from their perspective.  I was so enthralled with the show I didn’t track the set list, so…you’ll just have to take my word for it that it was awesome.